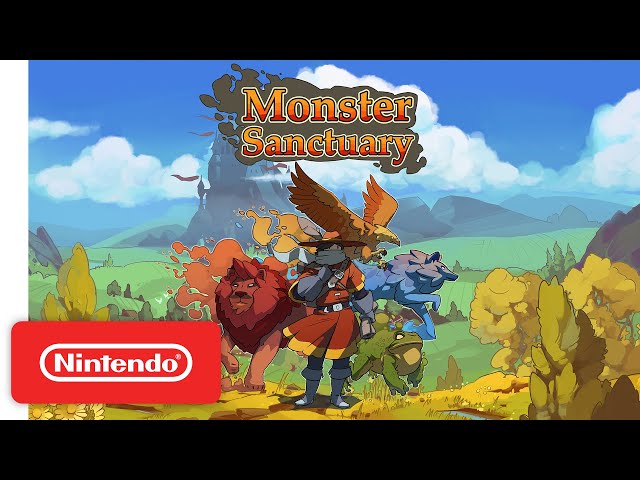 Monster Sanctuary, developed by Moi Rai Games and published by Team17, at first glance seems to be a hodgepodge of several other genres such as RPG, Metroidvania, and Pokemon (which is a genre all to itself). However, not long into my time with this game, it became evident that, while similarities exist, the gestalt that is produced when all of the elements are gathered together is a charming game all unto itself.

Monster Sanctuary starts the player, or “Monster Keeper” as they are called in-game, off with a simple yet difficult decision of choosing a starting monster out of four possibilities. Whichever one is chosen is revealed to be your family’s champion monster, serving as the voice to guide the story along. Story-wise, Monster Sanctuary was fairly basic, with story bits provided through scripted interactions with your initial monster and NPC’s in the environment from time to time. A further story element consists of “rival” keepers (sound familiar?) crossing your path at key points in the story. An interesting twist to this system is that one of the other keepers is considered to be a bit weaker and more naïve, with your champion monster suggesting you take him under your wing. This is in direct contrast to the other keeper you come across being a braggart and showing off at every turn. The story continues to progress as you defeat the ominously increasing number of champion monsters in the wild, going up in rank after said defeats.

As you encounter monsters in the environment, battles initiate with traditional fanfare. A unique mechanic, though, is rather than trying to capture these monsters, depending on the quality of your battling you may be given an egg to hatch one of the monsters for yourself. The hatching process is instant, with the option of turning in unwanted or duplicate eggs for rewards after a certain point in the story. Additionally, you have full access to all monsters that you have gathered at all times, though it is important to be mindful that only your chosen six will be available at the start of each battle. Thankfully, these six can be swapped out infinitely between battles in order to better suit the foes standing in your way.

Speaking of said foes, Monster Sanctuary features a fairly standard elementally-based attack system, consisting of strengths and weaknesses as has been seen in many other RPG games. In addition to direct attacks, each monster has the opportunity to learn various buffs, debuffs, and so on as they level up. An evolution system is in place as well, though like some of the other elements this system is gated behind an appropriate amount of story completion. In the meantime, though, battles award your monsters with skill points to help learn more skills and buff others, keeping you engaged and motivated to battle even prior to reaching the option to evolve your teams.

I think the most promising thing about Monster Sanctuary is the fact that, still being in early access at the point that my playthrough occurred, there is much more to come in the future according to the developers. Don’t get me wrong, there is plenty to entertain at this point, what with the seemingly endless combinations of equipment, enhancements, foods, and more to customize your already impressive monsters. However, the thought that more is to come is not too shabby either in my opinion.

1Seabiscuit star passes away at 24
2Dead to Me season 3 release date, trailer, and cast – everything we know
3The Book of Boba Fett episode 5 review – shall we just do The Mandalorian season 3 instead?
Latest
Jared Leto reacts to House of Gucci criticism
Jonah Hill claims Baby Yoda did not give him a black eye
The Batman won't show Bruce Wayne's origin story
Ben Stiller is "all for" making Mystery Men 2
Attack On Titan was reportedly the most in-demand TV series of 2021
A